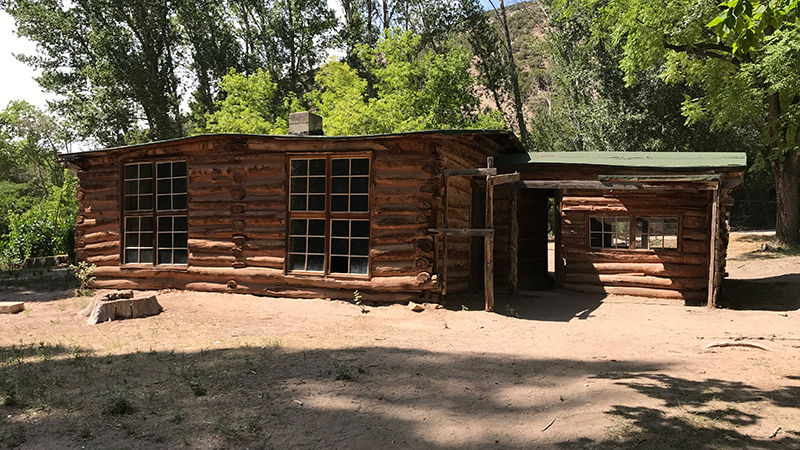 After visiting the Quarry Visitor Center and Quarry Exhibit Hall to see the famous Wall Of Dinosaur Bones, we had stopped at the Swelter Shelter petroglyphs, another collection of Fremont petroglyphs, explored a bit by the Split Mountain Campgrounds and along the Green River, snapped photos at several scenic overlooks, and checked out some interesting rock formations — all in the blazing hot sun in 100 degree heat.

The last stop of the Tour Of The Tilted Rocks scenic drive in Dinosaur National Monument ends at the end of Cub Creek Road and the historic Josie Bassett Morris Homestead, and by the time we parked, we were all hot and sweaty and over the moon to find trees and shade and a cool breeze.

Josie Morris was a single, independent, self-sufficient rancher and evidence of 50 year life along Cub Creek can still be seen.

Here you can see:

What was really fantastic is that Josie’s Cabin is open to visitors!

You can go inside, walk through the rooms, and imagine what it was like living in the small cabin without electricity or running water.

Josephine Bassett Morris, seeking solitude and beauty, settled in Cub Creek in 1914. She built several cabins on her homestead, the last being the one you can visit today, which was constructed in 1935. Married five times, Morris ultimately chose a single life, and over the years, she was accused but not convicted of cattle rustling twice and was an alleged associate of the outlaw Butch Cassidy.

Beneath the backdrop of Split Mountain, Josie provided for herself, living a 19th century lifestyle well into the 20th century.

She raised and butchered cattle, pigs, chickens, and geese, and used the eroding box canyons of Split Mountain — Box Canyon and Hog Canyon — as natural corrals for her livestock. She also canned the harvest from her large vegetable garden. Heat came from wood burning in the fireplace, water came from the spring, and there was no electricity, so light came from an oil lamp.

In 1964, while feeding her horse, Morris slipped on a patch of ice and broke her hip. Alone and without a phone to call for help, she dragged herself into the house where friends found her several days later. That spring she died at age 89 and her cabin and land became part of Dinosaur National Monument.