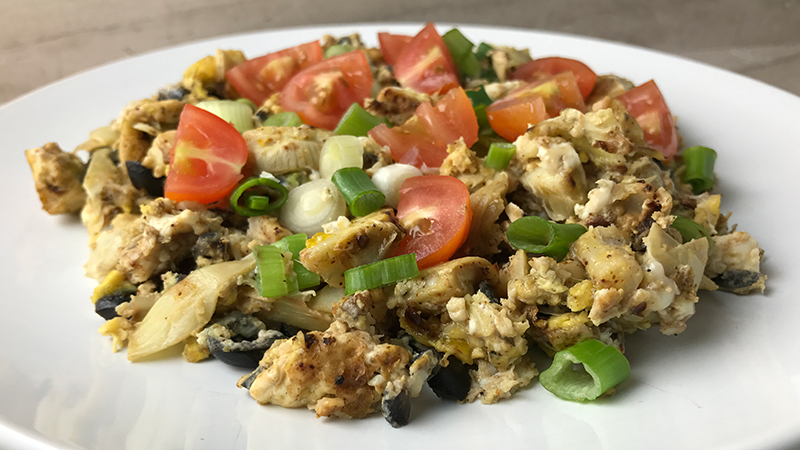 It was the morning of Whole30 Day 2. Brian and I were laying in bed and he asked, “What are having for breakfast today?” Typically this is a question I only get from my son, for whom I’ve been making breakfast everyday for since Christmas Break. For years, I have been making Brian breakfast and he almost never cares what we have, but now that we’re doing Whole30, he wants to know.

It’s not like I’m doing anything revolutionary or drastically different just because of The Whole30 Program. For the most part our breakfasts are staying the same, we’re just having breakfast scrambles instead of breakfast burritos and skipping the breakfast sandwiches.

I felt like his question was a challenge. I remembered I had artichokes on hand and that they are Whole30 approved! So I replied, “We’re having artichokes and eggs,” and he immediately said, “Gross!” But after he ate my breakfast, he quickly changed his tune. I drained the jar of marinated artichoke hearts, chopped them up, and threw them in a sauté pan with olive oil and a lot of garlic. When the artichoke hearts began to brown, I added the eggs, chopped black olives, salt, pepper, and cayenne pepper for a kick. We sometimes get stuck in a breakfast rut, eating breakfast scrambles with onions, bell peppers, tomatoes, and green onions over and over because it’s so tasty and easy. Thanks to Whole30 we broke out of our norm to make these absolutely delicious scrambled eggs.

This is one of my favorite breakfast scrambles ever!

The artichokes’ got just a little crispy along the edges and the flavor intensified. When mixed with the eggs and black olives, the whole Mediterranean Artichoke Scramble had a wonderfully delicious Mediterranean twist — and the cayenne pepper gave it just enough spice!