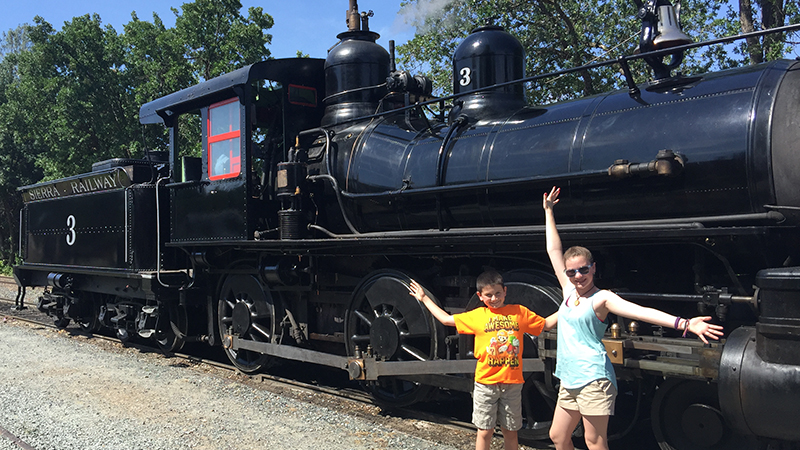 In the heart of Northern California’s Gold Country, about 100 miles southeast of Sacramento, Railtown 1897 State Historic Park invites visitors to experience the thrill of traveling back in time to the era of steam railroading.

The state park features preserved railroad buildings, equipment, locomotives, and railroad cars, with many dating back to Railtown’s 1897 origins. There is also an interpretive Center, a water tower, a large picnic area, and the Depot Store with all sorts of specialty railroad items.

The Railtown 1897 roundhouse — a semi-circular building for housing and maintaining locomotives — is one of only two continuously operating steam locomotive roundhouses in the United States. It includes an operating turntable, a working blacksmithing area, and a machine shop. You can follow their work on the Railtown Blog.

The highlight of visiting historic Jamestown and Railtown 1897 State Historic Park, is a six-mile, 45-minute roundtrip train ride through the Sierra foothills.

After the train ride, cold lemonade and a variety of cookies are available to all passengers — which was pretty awesome, considering how hot it was the day we visited!

Railtown 1897 and its historic locomotives and railroad cars have appeared in more than 200 films, television productions, and commercials.

According to their website, Hollywood producers filmed this steam locomotive along the scenic Tuolumne County Sierra Railroad for many Westerns.

The first known filming was in 1919, for a silent serial called The Red Glove. In 1929, Sierra No. 3 appeared in The Virginian with Gary Cooper, the first sound movie filmed outside of a Hollywood sound stage. It also appeared in High Noon, The Great Race, Bound for Glory, Back to the Future III, and Unforgiven, and was seen on many TV shows, including Lone Ranger, Petticoat Junction, Rawhide, Death Valley Days, Lassie, Gunsmoke, Bonanza, and Little House on the Prairie.

Throughout our train ride, the docent in our open air passenger car told us stories about the Sierra Raiload history, Tuolumne County, historic Jamestown, and she shared all sorts of movie trivia with us, including the perfect spot along the tracks where movie stuntmen would jump onto the moving train.

When we decided to visit Railtown 1897, we had no idea they had a Junior Ranger Program. What an awesome surprise!

After riding the steam train, we headed over to the waiting room for the Roundhouse Guided Tour to begin. Normally we prefer self-guided tours, but the only way to go inside and tour the roundhouse was to do the guided tour.

While waiting for the tour to begin, we were approached by a docent who invited Natalie and Carter to participate in the Junior Ranger Program, which is included in the park admission fee. Here’s the best part: the program was a separate guided tour just for kids ages 7-12 that took place at the same time as the adult tour.

Our adult guided tour was a lot of standing, looking, and listening. One of my favorite railroad vehicles on display in the Railtown roundhouse is the Hetch Hetchy Railcar No. 19.

The first track bus, Hetch Hetchy Railcar No. 19 could carry thirteen passengers, but was primarily outfitted as an ambulance car during Mountain Division construction carrying injured and dead to the hospital in Groveland. With its self-contained turntable under the floor it could be jacked up and turned anywhere along the railroad.

The kids’ tour however, was hands-on! I watched with envy as they got to go inside engines and railcars, try different tools, throw the track changing levers, drive a Velocipede Hand Car, and more. Plus, their guide was engaged with the kids and enthusiastic. They loved the tour and were stoked to receive a special Junior Ranger badge. I wanted to be on their tour!

While cold lemonade and cookies are provided after the train ride, we were still starving! So after both of our tours wrapped up, we met at the State Park Store and grabbed our ice chest and lunch supplies out of the truck.

Railtown 1897 State Historic Park has a large, well-kept, shady picnic area beneath the trees that looks out on the roundhouse, engines, and railcars — and there were even musicians on hand providing us with live music! It was the perfect spot to take a break and enjoy a family picnic.

When we were all done with lunch and our picnic mess was all cleaned up, we hopped in the car and headed over to Main Street in Historic Jamestown.

Main street is a delightful mix of stone, iron, and wooden buildings from different eras, with some dating back to the Gold Rush days. From candy, ice cream, coffee, and fudge, to antiques, gift shops, and kitchen supplies, there are restaurants and shops to suit everyone.

We found some beautiful jewelry and bought some sweets!

Here is a brief historical overview, from the State Park brochure, of the railroad and how the Railtown 1897 State Historic Park came to be:

Incorporated on January 1, 1897, the Sierra Railway Company was the brainchild of Midwesterner Thomas Bullock. Bullock and his fellow investors — San Francisco banker William Crocker, Crocker’s brother-in-law Prince Andre Poniatowski, and others — had lumber and mining interests in the area. The development of a short line railroad from Oakdale could replace horse drawn wagons to bring lumber and mining materials to the growing Sacramento and San Francisco areas.

Bullock had owned a failed railroad venture in Arizona that left him with three steam locomotives and several miles of rail. With the addition of 15 new freight cars, the Sierra Railway was soon moving U.S. mail, passengers and freight.

The Sierra Railway Company also established working relationships with the Southern Pacific Railroad Company and several stage lines to serve mining, lumber and agricultural interests. However, as the costs of gold mining increased with the onset of World War I, the Railway’s profits decreased. Even worse, trucking companies had begun competing with trains.

During the Great Depression, the Sierra Railway Company went into receivership. The company was allowed to reorganize without losing the value of its property. On April 1, 1937, it was renamed the Sierra Railroad Company and incorporated under the ownership of Crocker Associates.

In 1955, almost twenty years after passenger operations had ceased, the Sierra Railroad Company replaced the last of its steam locomotives with diesel power and opened maintenance shops in Oakdale. Fortunately, the historic Jamestown shops and locomotives were left intact.

Charles Crocker — a descendant of one of the original investors — decided to bring the Jamestown shops back to life as an excursion train theme park in the 1970s.

The attraction has had support from several advocacy groups. The California State Railroad Museum Foundation, an integral partner, has assisted California State Parks in funding important restoration projects. This partnership has brought about the recent restoration of steam locomotive Sierra No. 3, one of the three original locomotives that Thomas Bullock brought with him to California.

In 1982, California State Parks acquired 26 acres of land between Jamestown and Oakdale, through a gift from Charles Crocker. This acquisition included trackage rights on the Sierra Railroad.

From Fort Bragg to Yosemite to Santa Cruz, we have gone on many family railroad adventures and train rides — and I can’t believe we have never visited this State Historic Park.

How on Earth have we lived just a couple hours from historic Jamestown and Railtown 1897 and not visited before now is beyond me… I’m just happy we did visit, as the entire family had a great time.