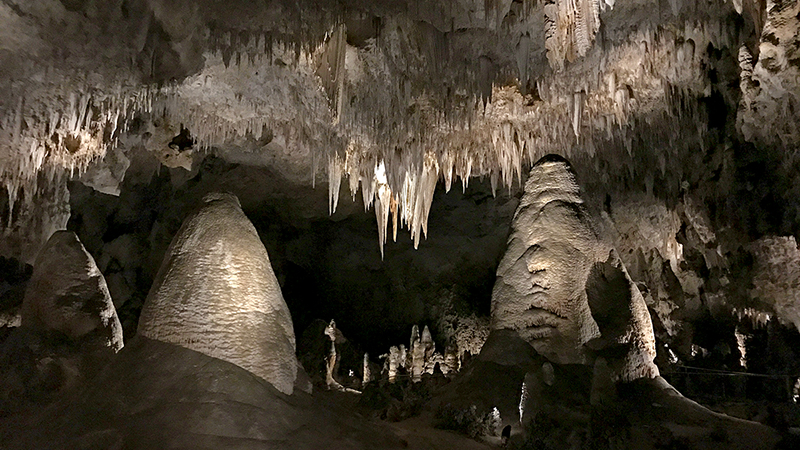 When visiting Carlsbad Caverns National Park, there are two main trails through the caverns that are free to explore with your paid park admission — The Natural Entrance Trail and The Big Room Trail. Both are spectacular, but one is much easier than the other!

The Big Room at Carlsbad Caverns National Park is a large limestone chamber that is almost 4,000 feet long, 625 feet wide, and 255 feet tall at its highest point. It is the fifth largest chamber in North America and the twenty-eighth largest in the world.

We were so excited to see the Big Room, but almost missed it! While on our road trip, Carter got sick on our second day in Big Bend National Park and Brian woke up really sick the morning of our day at Carlsbad Caverns. Normally we would have adjusted our schedule, but we had already bought tour tickets for the King’s Palace Tour and it was sold out every other time during our stay.

Brian medicated when we arrived and made it through our Natural Entrance Trail hike and the King’s Palace Tour, but then felt so weak we couldn’t do the Big Room Trail. We rode the elevators up to the Visitor Center, ate lunch, got more medicine into Brian, and relaxed until he felt strong enough to walk some more. Then we rode the elevators back into the cavern to walk the Big Room Trail, knowing if he needed to he could take the shortcut back to the elevators.

Luckily he made it through the entire trail with us and we all had a wonderful time!

Big Room Trail is a relatively flat, 1.25 mile trail through the largest single cave chamber by volume in North America that has the capability to swallow six football fields. It takes about 1.5 hours on average to complete but if you are seeking a shorter experience, the Big Room Trail has a shortcut that makes the walk only about 0.6 miles and 45 minutes.

This trail, along with the Natural Entrance Trail, and the King’s Palace Tour are the most popular trails at Carlsbad Caverns National Park. All three are paved, lighted walks with handrails lining the trails, but the Big Room Trail is the only one that is considered easy. In fact, a 1.0 mile section of the trail is accessible to those in wheelchairs.

We began our exploration of the Big Room from the Underground Lunchroom and as we walked through a well-lit passage, we were immediately surrounded by amazing speleothems. Then on the other side of the passage the cavern opened up into the largest cavern we have ever been in.

The Big Room is like no other cave we have visited.

The rock formations along this trail are strategically lit to provide the most dramatic and impressive views and one after another after another appear around every turn.

Signs along the trail told the stories of cave and formation discoveries, and an old rope ladder hangs into a large hole in the floor of the cave — that ladder was the original way cave explorers accessed the Lowers Caves. Just a bit farther down the trail there is a better view into the Lower Caves and another tourist who brought their own flashlight lit it up for us.

Soon we made it to the area of The Big Room known as the Top Of The Cross, named for its position on the shape of the Big Room Trail. Here there are rows of benches installed in a mini theater setting with plenty of room for your group to take a break and relax. Years ago the stage was used for underground concerts and four members of the New Mexico Philharmonic performed there for the National Park Service’s Centennial celebration.

Next we passed Mirror Lake and the Bottomless Pit that isn’t really bottomless — it measures 140 feet deep. This marked the approximate halfway point of the Big Room Trail.

As we worked our way back to the Great Room and the Underground Lunchroom, we passed a wall of glittering rock, a huge live stalagmite named Crystal Spring Dome, gorgeous examples of draperies and cave bacon, painted grottoes, the Rock Of Ages formation, and a pool of ice-blue water.

I am so happy we were able to walk this entire trail together! All together we spent about five hours underground and walked about four miles without seeing the sun. It was an awesome experience that I highly recommend for your whole family.

About The Big Room: